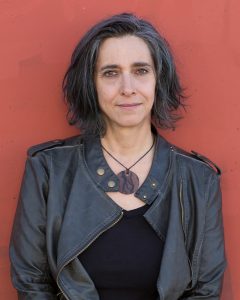 I’m a writer of true stories, personal essays, and memoir; this usually means disclosing things I’m not “supposed to.” So that’s what I do—whether it’s about growing up with a CIA dad, swimming with sharks in the San Francisco Bay, or facing cancer and how I chose to move with it instead of “fighting it.” I seek to cultivate compassion and truth in all my writing.

My dad joined the CIA when I was a baby and shortly after we moved to Athens. Just in time for a coup. I’ve spent years trying to learn what my Cold War father’s role was in that event. And though we left when I was still a child, Greece is a place I return to often. I moved around frequently after Athens until I landed in Boston for college and it became my new home. I received a master’s in education from Harvard and taught G.E.D. to high school dropouts. After years apart, I reconnected with my college flame, Susan, and moved to her treehouse in Oakland. That’s where I currently live and write. I’m an Oaklander now. Oh and I’ve recently started posting essays on Medium. Click here to read my latest—Living in the Shadow of a Spy.

Thanks for accompanying me on the journey.

Every month I send news about my work as well as reflections on writing. Thanks for joining me as I write into the open.